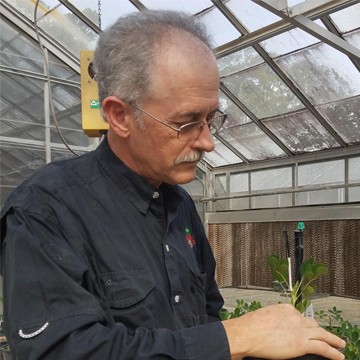 Dr. Timothy Brenneman is a Plant Pathologist at the University of Georgia (UGA) and has been in this position since 1986. He began his college education at Goshen College in Indiana, where he studied biology. Brenneman then attended graduate school at Virginia Tech, where he completed an assistantship in a peanut project. Immediately after graduation, he was offered a job at UGA – Tifton. When he first came to UGA he was working with leaf-spot disease, but after a year or two, he was given the opportunity to switch over to soil-borne diseases.

Brenneman’s expertise is in plant disease management, and applied epidemiology. He explained that his program is relatively broad-based, but mission-oriented and focused on real issues that growers face while producing peanuts here in the southeast.

He has worked extensively with the new peanut fungicides, but one of the most impactful projects that he has worked on recently has been to help develop new seed treatments. Before this work, there was one main treatment, Dynasty by Syngenta. In 2020, after a very hot and dry summer, overall peanut seed quality was poor and there were also issues in the state seed lab with Aspergillus flavus contamination. From the work of Brenneman and his colleague, Dr. Emran Ali, they were able to determine that the Aspergillus had become resistant to Dynasty. Moving forward, they determined that Rancona, a new seed treatment, was active on those strains, including the ones that were resistant to Dynasty. The industry was able to make this change in a matter of a few months and was able to avoid significant stand losses that would have been a huge cost to the industry.

A long-term project that Breneman has been working on with the breeders and his colleagues is to improve the disease resistance of new cultivars. The most noticeable difference has been in nematode resistance.  Several peanuts with virtual immunity to root knot nematode have already been released from the breeding programs of Dr. Corley Holbrook and Dr. Bill Branch, and more are on the way.

Brenneman hopes that one result of these projects will be for the industry to continue to grow peanuts economically. Any crop grown today must be competitive on the world market. People grow peanuts all around the world, and whoever does it most efficiently will be the ones that stay in business. Therefore, it is imperative for growers to stay up to date on the latest, most efficient methods.

The findings from both projects should be relatively easy for growers to adopt. Most growers have already adapted to using Rancona in place of Dynasty, partially because the seed has already been treated upon purchase. The most important concept for growers is that they know their field and know the issues that they are facing, this will allow them to choose the most suitable variety.

Breneman also explains how unique Tifton is in having the critical mass of researchers across several different disciplines. Having a comprehensive team from UGA, USDA, and private industry all working alongside growers with the same goal in mind, has been a great benefit to this industry.