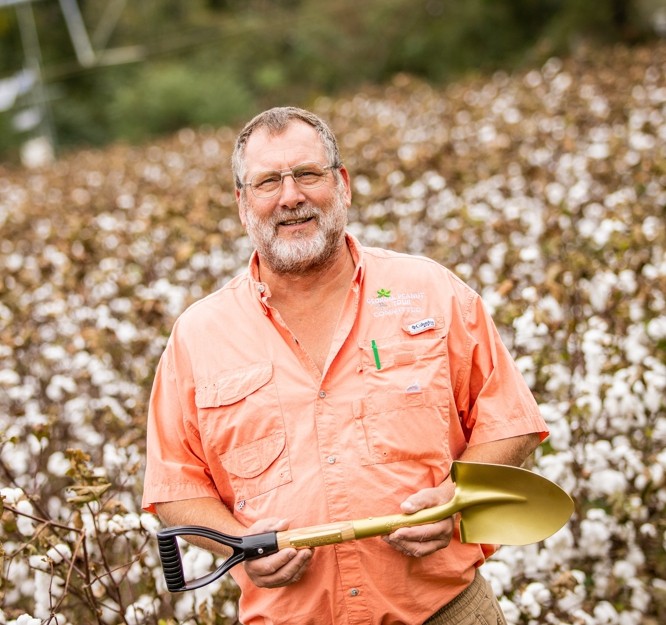 Dr. Glendon Harris is an Extension Agronomist for Environmental Soil and Fertilizer at the University of Georgia (UGA). He is originally from southern New Jersey. He attended both Pennsylvania State University for his undergraduate degree in Horticulture and Michigan State University for his graduate school studies in Crop and Soil Sciences. Harris was brought to Georgia through a post-doctoral position with the United States Department of Agriculture (USDA). In March of 1994, he began with UGA – Tifton.

Harris’ position is housed within the very diverse Crop and Soil Sciences Department at UGA. He works with all the row crops, but primarily cotton, corn, and peanuts. Much of his time involves working with the formulation of new fertilizers and issues that have been presented with certain crops.

One of the most impact projects that Harris has completed was when they switched out the main peanut variety from Georgia Green, a small seed to O6G, a large seed. Initially Harris and his team thought that this variety was going to require more calcium than the previous. But after many rate trials, they determined that the crop’s need for calcium was relatively like the variety used in the past.

Recently, Harris has been doing a lot of micronutrient work, looking at sulfur and an alternate way of using calcium on peanuts.

Each of these advances should be relatively easy for growers to adapt to. These changes, or in some cases the lack of change, will result is saving the growers money in the long run.

In addition to his research and trials, he also teaches for the university. Every fall, he teaches Soils and Hydrology, which includes a field trip the Providence Canyon State Park in Lumpkin, Georgia.

All of Harris’ peanut work is funded by the National Peanut Board and the Georgia Plant Food Educational Society.